'The Day of The Doctor' 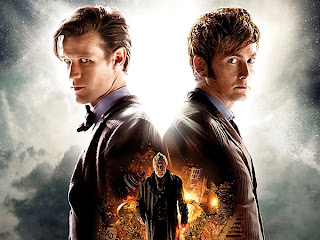 We don't have a TV licence so it's taken me this long to finally watch 'The Day of the Doctor', thanks to not only my phone refusing to get along with iPlayer but my my computer as well. Honestly... I would have been better off peering through someone's window and asking them to turn the sound up ;o)
I got there in the end though, I can be pretty bloody-minded where Doctor Who is concerned, and here's what I thought about the whole glorious mess. Before we get to that though, it's only fair to let you all know that I'm making the assumption (a pretty big one too) that everyone who wanted to see 'Day of the Doctor' will have seen it by now. There will more likely than not be spoilers lurking in the words ahead... Are we all good? Then lets go.

Every time I watch Doctor Who I have to make a little bit of room in my head for the five year old me who started watching all those years ago. We both loved 'The Day of the Doctor', a big old mess of everything that has made the show great over the years. From where I was sat, I was in awe of how everything seemed to just tie together, all those seemingly incidental lines, thrown out over the last few years, that have home to roost in a plot that was pretty darn tight. Not just the immediate plot either, I'm talking about all the stuff that is clearly going to be happening from here on in. Everything is different now and there was no sense of any compromises being accepted in terms of the overall plot. I liked that :o)

While all that was going on, the five year old me (ok, and the thirty eight year old me too...) was having the time of our life watching the Doctor do what he does best, save the day in the face of everything. Only it wasn't just the one Doctor it was all of them and that has to be one the most awesome things I've seen on TV, sorry Olympics Opening Ceremony... The three Doctors taking centre stage more than lived up to that focus. The Doctor's regenerations never seem to get on with each other and Matt Smith and David Tennant clearly had a lot of fun reprising all that sarcasm and put downs John Hurt's 'War Doctor' was a pleasure to watch, unable to believe what he was to become after what he had been forced to do. And Zygons, and Daleks and, well... everything else all thrown into the mix and dished up as slices of humour, action and pathos. Seeing Tom Baker at the end was the icing on the cake.

I don’t think I’ve been this excited about Doctor Who in a long time (it’s all good but the Matt Smith era kicked off on a bit of a meh’ note for me personally). I can’t wait for the Christmas special now :o) What did you think of it?
Posted by Graeme Flory at 09:38

Email ThisBlogThis!Share to TwitterShare to FacebookShare to Pinterest
Labels: doctor who