A little bit from 'Behind the Sofa'

And I'm not talking about what I found, the other day, when moving our sofa. That bloody mouse, I will catch it if it's the last thing I do...

No, I'm talking about the 'Celebrity Memories of Dr. Who' that is out right now. With the 50th Anniversary episode out in a few days time (yep I'm excited especially after watching the 'minisode' the other day) Gollancz have been releasing little snippets of book out into the wilds and seeing where they land. I got a piece by Ben Lawrence (TV & Radio Commissioning Editor at the Telegraph apparently, you learn something new every day...) and here it is. 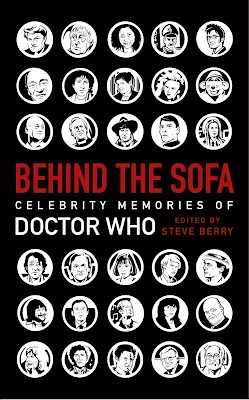 It is hard to believe now, but there was a hint of cynicism in the air in March 2005. Us lifelong Doctor Who fans had been dreaming of a regeneration for nearly 16 years, but of course we had been here before. In 1996, Paul McGann and The TV Movie had tried to breathe life into a dead franchise, but had twisted the premise into a cod US imagining of what a British science fiction show might be. It was unexciting and, crucially, lacking in any charm.The press launch for Russell T Davies’s new series in Cardiff proved that the BBC had faith in it. They had invited celebrities (Charlotte Church, Robson Green, Matt Lucas), produced proper canapes and, unfortunately for me not stinted on the wine. And then the screening. I can still feel the whizz of adrenaline.Rose lasted 45 minutes but it seemed to last seconds. A tightly constructed story, its use of Autons was inspired, their aesthetic blending in perfectly to 21st century TV. It was funny. And Billie Piper as Rose silenced all the naysayers with her touching, heartfelt performance. But it was a speech that really struck me. Christopher Eccleston’s “Now forget me, Rose Tyler” was unlike anything the series had witnessed before. It was the Doctor as Prospero and the moment that Doctor Who was elevated from tea-time whimsy to award winning drama.Enjoyable, always. But now with something genuinely important to say. I was grinning from ear to ear. As was everyone after the launch. Barry Letts was there, looking exactly as he did in 1973. This wise old guardian of the show clearly approved. As did Terrance Dicks, although you could tell that razor-sharp mind had been unpicking the structure and the dialogue, wondering what he would have done better.And that was it. The day Doctor Who became a critic’s choice, the day the world changed. The day I drank too much red wine and got black lips, and had to later endure an army of Autons marching through my head. Still, it was all worth it.

I can't remember exactly where I watched that episode but I remember feeling similar kinds of things. Dr. Who was back and, better than that, it looked really promising. I'm hoping for more of the same next weekend and I'm pretty confident I'll get it. I think we all will.

As I said somewhere up the top, Behind the Sofa: Celebrity Memories of Dr Who, edited by Steve Berry is out now, Gollancz, £9.99 (author royalties are donated to Alzheimer’s Research UK). You can find out more about the book Here and, if you do buy a copy, you can see where those author royalties go by visiting the Alzheimer's Research UK Site.
Posted by Graeme Flory at 01:30

Email ThisBlogThis!Share to TwitterShare to FacebookShare to Pinterest
Labels: news