Some Books in the Post - The 'Got The House All To Myself' Edition!

I seem to be getting into a habit of saying this but, wow what a week...!
Sue and Hope spent the first part of the week being ill here (bronchitis for Sue and a filthy cold for Hope) and have since spent the second part of the week being ill down in Plymouth with my in-laws. Hopefully they should be well and back here in the next couple of days (I miss them).As for me? I've been busting my bits trying to get head round the ins and outs of the new job; I'm almost there :o)

This week has been all about the books as well though, isn't it always here? :o) You've seen one of them already (see the post below) but there were a few others as well. Check em' out... 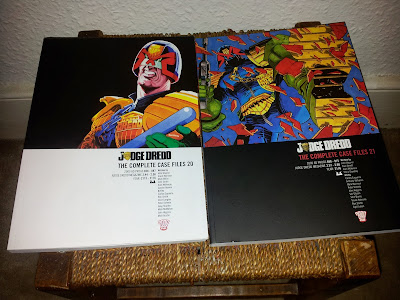 The 'Judge Dredd Casefiles' are all about me trying to catch up with, and revisit, some of the cool stories that I missed out on years ago. This post has been scheduled so volume 20 will be what I'm reading a few hours from now when I wake up. Volume 21 could well be a 'commute read', on Monday, so if you're in London and see someone reading this book, it's probably me. Come and say hello :o) 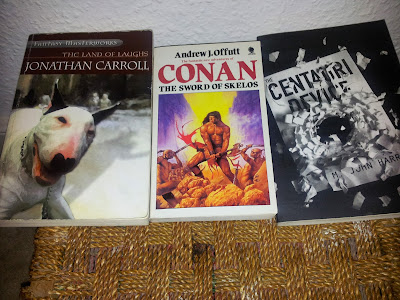 I'm not going to lie, as soon as I knew Sue and Hope were on their way to Plymouth I took the chance to nip across town to the 'Book and Comic Exchange' in Notting Hill; a second hand bookshop that I'd been meaning to visit for a long time. Normally the only time we're ever there is for the Notting Hill Festival which isn't the best time for browsing books... This time was different though :o)
I've got to say that the 'Sci-Fi Corridor' was more like a slightly elongated 'Sci-Fi Alcove' but it was still crammed full of the good stuff so I shouldn't complain. You really need to go and check it out if you're in the area. Anyway...
The 'Fantasy Masterworks' collection grows a little bit more with 'The Land of Laughs'. I used to own a copy of this, which got lost in a long ago purge, so I was really pleased to see it on the shelf. Same deal with 'The Centuari Device'; it might not be the same cover but the book is back where it belongs on my shelf (and that's good).
I'm not quite sure how it happened but I somehow seem to be collecting old 'Conan' stories now and 'The Sword of Skelos' is the latest addition :o)

All of these books will get the review treatment here at some point. Can't say exactly when though as I've got some other bits and pieces that I want to write about first. Have a good Sunday everyone :o)
Posted by Graeme Flory at 05:00