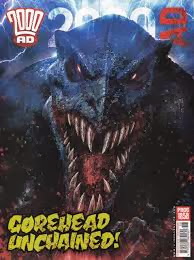 I’ve managed to get onto the list for electronic copies of 2000AD so you can expect to see more posts like this in the future. I’m still not a hundred percent sure when I’ll post them but Prog 1858 is out on Wednesday so I figured today would be a good time to kick things off.

The thing about comics like this is that, unless you’re very lucky, you’re never going to be able to start at the beginning. You’ll always be catching up and there will always be at least one story where you’ll never know how it began (unless you’re willing to backtrack a little and I’m not one for that these days). You have to start somewhere though and although I’ve come in at the beginning of the Judge Dredd story, as well as ‘Damnation Station’, I’m playing catch up with the other three. In at the deep end then, lets get going.

I’ve read a few Dredd stories now and I’m feeling like I’ve heard this one before with a monster prowling the ruins of Mega City One and Dredd the man to stop it. This is only the start though so there’s still time to be surprised. Emma Beeby sets things up well and there’s a nice little hint of ‘bringing law back to a lawless city’ (Dredd has a lot to do in the eyes of the juves) that I think could be as interesting to watch play out as the main plot. Nice artwork by John Burns as well with his minimalist approach to the Mega City Skyline heightening the sense of devastation.

There was always going to be one story here where I didn’t have a clue what was going on; ‘The Diamond Age’ is that story. The story is buzzing along a little too fast to get caught up (my fault, not the story) and the art didn’t give me much of an idea of what was going on and where.
I’ll follow ‘The Diamond Age’ through to its conclusion but really I’m waiting for this one to finish I think.

I loved ‘Flesh’, way back in the day (and on the other blog), so I was looking forward to more tales of cowboys harvesting dinosaurs and inevitably doing something really stupid so the dinosaurs get loose. This is another ‘part nine’ but it was really easy to get caught up here. It’s simple, a dinosaur gets loose and there’s carnage. Pat Mills and James McKay are sticking to a formula that won last time round, they may be playing it safe but the end result is cool so I don’t mind too much.

And sometimes you’ll come in right at the end of a story… This time round a dead cop finds that there is still police work to be done, involving time travel, so that the restless dead can finally have justice. There’s not much to say here other than that the ending seems to tie everything up very neatly. I get the impression that ‘Rewind’ was strictly a one off but I wouldn’t mind seeing more.

‘Damnation Station: The Howling Beast on the Borderline’

I’m a big fan of Al Ewing’s work (although I still need to re-read the second ‘Zombo’ collection just to work out what the hell is going on…) so ‘Damnation Station’ was a great way to round off this issue. It’s typical space opera with a typical weird twist from the man Al Ewing; I loved how the battle played out (as well as the dialogue between the Commander and the alien Host) and the cliffhanger has got me really eager for the next issue to come along. It’s brilliant stuff and Mark Harrison is clearly the man to illustrate the darkness at the edge of space.

Not a bad prog to get things started here then. There will be more to follow…