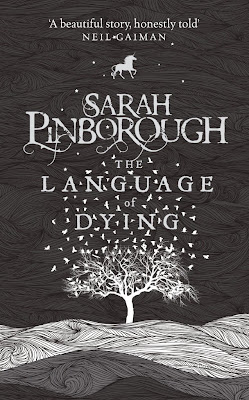 A woman sits beside her father's bed as the night ticks away the final hours of his life. As she watches over him, she relives the past week and the events that have brought the family together. There has never been anything normal about the people raised in this house, and the bonds that bind them are fragile.

Sitting through her lonely vigil, she remembers what she saw all those years ago, the thing they found her screaming for. And as she peers through the window, she finds herself hoping it will come again.

Because it's one of those nights: a special, terrible night - and that's always when it comes. If it comes at all...

It's really hard to know where to begin with 'The Language of Dying' possibly because although I finished the book yesterday I'm still living it. It's one of those books where the subject matter gets under your skin and lets you know, in no uncertain terms, that it will leave in its own good time.

I can't ramble on too much though so here goes. 'The Language of Dying' takes two fairly major taboos and delves deep into them with a raw honesty that left me mentally gasping. Death and families; we don't like to talk about them too much, what they really mean to us, but they are always there. Sarah Pinborough gets the reader to confront them and makes it so you can't shy away from the dark stuff. There isn't a lot of bright stuff either although there are moments that make you realise that death can be a positive thing. For this family though, the positive notes are shortlived and it becomes clear that some families are meant to go off in different directions.

The narrator (I don't think we ever hear her name) tells her story with such a brutal honesty that, at times, I felt like I was intruding on something incredibly personal and shouldn't be there at all. At the same time though, I felt like I had to respect that honesty and make the journey with her. That's what kept me reading, that and a guilty feeling of 'this hasn't happened to me so I feel like I owe her'. Everything is laid on the line and you can't look away.

This brutal yet poignant journey into death is beautifully told and the element of the supernatural adds another layer of storytelling that will keep me thinking about the possibilities to be found in 'The Language of Dying'. Is the creature real or is it a sign of the kind of madness that affects her brother (maybe even her own family)? Either way, it's the offer of some kind of escape that is important and adds that final impetus to the tale.

Email ThisBlogThis!Share to TwitterShare to FacebookShare to Pinterest
Labels: 2013