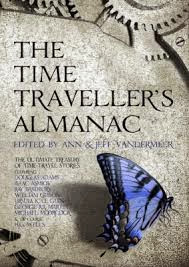 'Death Ship' is the opening story in Ann and Jeff Vandermeer's 'The Time Traveller's Almanac' and, as such, was the perfect way to combine two of my favourite reading past times at the moment. I'm always looking to read anything by Richard Matheson and if the Vandermeers were to release an anthology of shopping lists, you just know that said anthology would have you considering shopping lists in ways that you never thought you would. Anything with their name on it is required reading for me then.

Have you seen the size of 'The Time Traveller's Almanac' though? It's massive, a book that could easily cause some damage if it fell from a great height (I say this because it fell off the bunkbed this morning and caused some damage...) I'm not going to be able to cover all the stories inside, in one post, so I'll be focussing on some in a bit more depth and offering a few thoughts on the book, as a whole, a little closer to Christmas.

Which brings me neatly back to Richard Matheson and 'Death Ship'.

‘Mason stood up as the captain gestured towards the door. Mickey started to move, then hesitated. He looked at the bodies.
“Shouldn’t we…?” he started to inquire.
“What, what?” Ross asked, impatient to leave.
Mickey stared at the bodies. He felt caught up in a great, bewildering, insanity.
“Shouldn’t we…bury ourselves?” he said.’
Whilst exploring a planet, for potential colonisation, the crew of a spaceship discover another ship has already crash-landed. It's not just any old ship though, the bodies inside the wreckage are theirs... Having seen their fate, the crew must decide whether to depart the planet or cheat death by staying. They can't stay though...

When I realised what the ending actually meant for the crew (I read it three times and suddenly went, “wow…”) I had to ask myself how much of a time travel tale ‘Death Ship’ actually is. There’s a definite element of horror there that, for me, overshadowed the whole time travel thing (and I can’t say more without giving the game away, Matheson does his trick of setting expectations then blowing you away with something out of left field). Time travel is definitely a feature though so it counts. Magnanimous of me, I know :o) I liked the Matheson introduces the theme as it asks a lot of questions of characters already on the edge. It asks a lot of questions of the reader as well. Can the crew cheat fate? On that score ‘Death Ship’ is a tale that gets you thinking.

It’s a Richard Matheson tale and, for me, that means very intelligent use of language that sets the reader in the middle of things right away. You never find out much about the planet itself, you don’t need to. This is all about the crew and their reactions to one hell of a conundrum. I really felt the sense of panic in the crew as things became much clearer, Matheson takes the reader along at exactly the same speed (never giving anything away until the right moment) and it’s like you’re right there with the characters.

And that ending… If the rest of the tales in ‘The Time Traveller’s Almanac’ are of the same standard then I’m looking forward to dipping in and out of this book over the next few weeks.