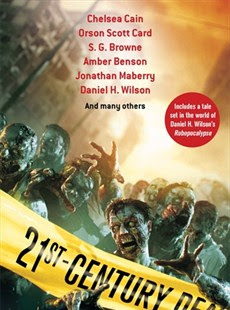 It had to kick off with zombies didn’t it? It’s got to be better than starting a blog off with a review of ‘Twilight’ (yep, I did that…) Apologies for the chopped in half cover, it was the best one I could find.

I say ‘quick thoughts’ because I’m slowly, but surely, falling out of love with the whole zombie genre. Sorry but that’s the way it is. I’ve got to admit, part of it is not being able to daydream about being the ‘hardcore lone survivor’ without Hope gate-crashing the daydream in one form or another. The other thing though, and I’ve said this elsewhere, is that there’s just too much zombie fiction out there now. It’s not fresh anymore (if you can say that about zombie books…) and that’s what putting me off.

When a copy of ‘21st Century Dead’ turned up then, I couldn’t even really get motivated enough to open the book. It was only the fact that I recognised a few of the contributing authors that got me reading what I did. I will always read anything by Brian Keene (and so should you if you’re into horror) and that kind of got me going. Here’s what I thought…

I’m a fan of Keene’s work so it was pretty much inevitable that I would enjoy this apocalyptic tale of a young girl and her ‘TV addict’ mother. Keene really nails the heartbreaking feeling of a little girl who loves her mother and just wants to be noticed. Add a little gut wrenching horror and you have a very short story that bursts into life in all the right places. Nice ending too.
I couldn’t help but think though that this is the third story I’ve read in Keene’s ‘Hamelin’s Revenge’ setting and the third story where he has repeated exactly how the zombie apocalypse happened. I don’t know about others but I only needed to be told the once…

‘All the Comforts of Home’ – John Skipp & Cody Goodfellow

This tale of life after the zombie apocalypse dragged a bit (the setting was a little bit too safe maybe?) but there was some really innovative ideas about how society could function quite adequately once the heat died down; especially in terms of the role that zombies could fulfil in all of this. What was best though was the way that the authors widen the perspective right at the end. Life in the City may be comfortable but it’s just a speck of normality when set against the rest of the world…

A tale of revenge that takes on a voodoo slant and gives the plot a refreshing tone. It’s repetitive though (one revenge killing after another) and that makes the ending a bit too much of a foregone conclusion for my liking. And what was it with that ending? Not quite sure what was going on there.

‘The Dead of Dromore’ – Ken Bruen

Ken Bruen was the only name I didn’t recognise and, funnily enough, it was his story that I enjoyed the most. This tale of a search and rescue mission gone sour is short and punchy while the ‘zombies fighting their urges’ theme adds a little tension and menace to the proceedings. Glad I found this one and I'd be interested in seeing what else Bruen has written.

That was about as far as I got with this book. Fans of Orson Scott Card, Jonathan Maberry, Amber Benson, S.G.Browne and Daniel H. Wilson (all contributors) might be interested in reading a little further than I did. This tired fan of zombie fiction has maybe two more reviews in him before he bows out of the genre completely.

Email ThisBlogThis!Share to TwitterShare to FacebookShare to Pinterest
Labels: 2013, zombies

So, I'm back. Hello again :o) Did you miss me? I missed you guys (yep, even you) so thought there was nothing for it but to come back and have another crack at blogging again. I love talking about genre fiction, can't stop in fact (reports that I do this in my sleep are as yet unconfirmed) so it was pretty much inevitable really :o)

This (hopefully) won't be another 'Graeme's Fantasy Book Review' though. For a start, life is very busy right now (job hunting, being a Dad, being a 'Dad to be' again and more job hunting) so the days of a review a day probably won't be back any time soon. I don't even know if I'll be able to manage a post a day right now! We'll see how it goes but I'm aiming for a schedule that's a little more relaxed (ok, a lot more relaxed) than last time round. I don't want to find myself in a position again where I'm not enjoying myself.

The other thing is that there won't be so many new releases being mulled over here. That's not to say I won't be covering them but I'm more interested in getting reacquainted with what's already on my shelves . There's some cool looking stuff there (although I would say that wouldn't I...) so we'll see how that goes as well.

And... that's about it :o) I'll be adding little bits and pieces to the blog over the next few days (a blogroll and so on) to make it look more like a blog. I'm not too sure about the template either but anyway... It's good to be back and see you all again :o)