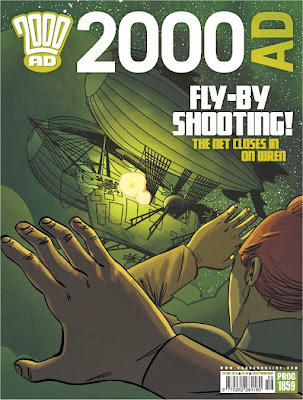 I'm a little bit later than planned with this post but that's kind of been the story of this week really! Just a short post for today then, I am so looking forward to this weekend and just resting up a little... Anyway... Prog 1859 was fun to read, possibly because I decided that life was too short and ditched one story entirely. You can probably guess which one that was.
Here are some quick thoughts on what I read. This time round, I’m concentrating more on the stories as the artwork has remained pretty much consistent from the last issue (apart from the ‘Future Shocks’ story which is new). Here goes,

I only started reading this story last week and already it's at a crossroads. I've got a horrible feeling this story is treading familiar ground (won't someone think of the children?) but I've still got high hopes that it's somehow going to form part of something much larger. Please let it be the latter, please? Still fun to read though, especially with Dredd's interactions with the Juves.

‘Future Shocks: Home Are The Heroes’

I have no idea what was going on here (the plot hinges on something that was never explained) but the note of horror, right at the end, really made it for me. A story that really makes you consider the title in a whole new light. I really enjoyed Nick Dyer’s art as well, reminded me of the copies of 2000AD I used to sneak a look at when I was a kid.

This story is far too advanced for me to get caught up quickly and I found that I wasn't interested in even trying so, erm... I haven't.

This one is kind of hard to call really. Part Ten has all the awesome stuff that Part Nine had but didn’t really move the story on that much if at all. But… Dinosaurs! Well, one big dinosaur facing off against one lone cowboy. Yeah, I’ll be back for more of this next week :o)

‘Damnation Station: The Howling Beast on the Borderline’

Is there nothing that Al Ewing can’t write? I’m still getting to know the characters (and I’m wishing that I spoke more than just English, couldn’t understand a word the lady was saying…) but this is an awesome slice of void warfare with aliens boarding a space station and some hard choices to be made by the command staff. And what a cliff-hanger… I will definitely be back to see what happens here.
Posted by Graeme Flory at 11:53