I'm still idly holding out hope for a newly published zombie book to come along and do it for me like they used to back in the good old days. I'm not holding out a lot of hope to be honest but, in the meantime, this tickled me a little bit so I thought I'd share :o) 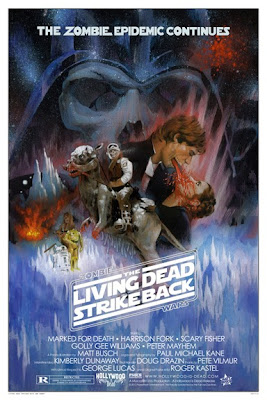 Artist Matt Busch has just released a crowd-funding campaign for the long-awaited Hollywood is Dead coffee table art book. Clocking in at 192 pages, the hardcover book will feature the giant collection of zombified parody movie posters that Busch has illustrated over the past five years, dozens of which have never been seen. The tome will also take a look behind-the-scenes at how the posters are created and feature a gallery of his other zombie-related works for properties like Night of the Living Dead and The Walking Dead.

The Hollywood is Dead project began as a series of Star Wars movie poster images at the request of Lucasfilm, only to be repainted by Busch into a twisted undead universe. With fandom hits like Zombie Wars: The Living Dead Strike Back, it was clear that the artist was destined to move beyond Star Wars and into the rest of the iconic cinema classics. The project soon gained attention on G4TV's Attack of the Show and Late Night with Jimmy Fallon as Busch unveiled one new zombified poster after another. Fan favorites include Breakfast at Tiffany's (Breakfast is Tiffany), Edward Scissorhands (Deadward Scissorhands) and Toy Story (Toy Gory).

Details on how the book will be available outside the campaign are not ironed out yet, but Busch assures that pledgers will get the book well before anyone else, and at a better price. The Kickstarter also features exclusive reward packages, like signed / sketched books, and art prints not available anywhere else. The campaign for the Hollywood is Dead art book (only 4 weeks, which is shorter than most) is now live, and will expire on November 29th.

The direct link to the Kickstarter page and video is here: http://www.kickstarter.com/projects/mattbusch/hollywood-is-dead-coffee-table-art-book
What's not to love about zombified movie covers? Especially ones like this, 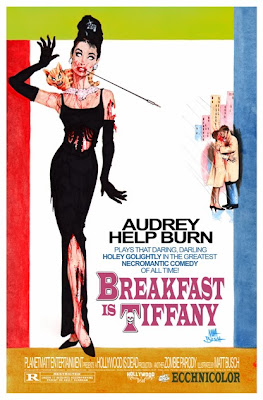 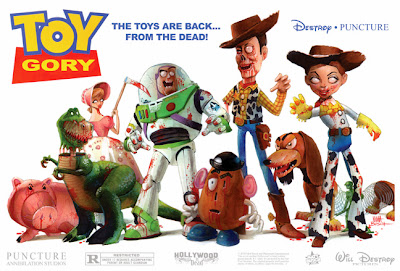 I'd maybe wait for those 'Details on how the book will be available outside the campaign...' to be ironed out before chipping in but 'Hollywood is Dead' looks like it could be a book worth supporting (just for the novelty value of having a book like that on your coffee table). What do you think?
Posted by Graeme Flory at 00:49