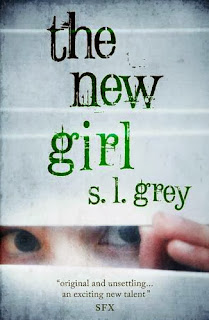 It didn’t take S.L . Grey long to become a writer that I will stop reading everything else for. Both ‘The Mall’ and ‘The Ward’ were deeply unsettling reads that I couldn’t put down, either if I’d wanted to. Good horror fiction (weird or otherwise) still feels like it’s hard to come by so I will always make time to read the good stuff.
I’m still a little bit behind with what’s being published, and when, so the release of ‘The New Girl’ came as a little bit of a surprise to me. No matter though, the second I realised the book was out I made damn sure I had a copy to read. That was a couple of weeks ago though and I’ve only just got round to writing my thoughts down, so what happened?
It’s been hard to collect my thoughts around this book; everything was there that made the last two books so gripping but I came away from the experience feeling a little bit, I don’t know… emptier than before. It took me a little while to work out just why and here I am now, ready to say. Let’s go shall we?

The blurb has been copied and pasted because it’s one of those days today :o)

Ryan Devlin, a predator with a past, has been forced to take a job as a handyman at an exclusive private school, Crossley College. He's losing his battle to suppress his growing fascination with a new girl who seems to have a strange effect on the children around her.
Tara Marais fills her empty days by volunteering at Crossley's library. Tara is desperate, but unable, to have a baby of her own, so she makes Reborns - eerily lifelike newborn dolls. She's delighted when she receives a commission from the mysterious 'Vader Batiss', but horrified when she sees the photograph of the baby she's been asked to create. Still, she agrees to Batiss's strange contract, unaware of the consequences if she fails to deliver the doll on time.

Sometimes, even if you have all the same ingredients it’s the execution that can really make or break things. I’m talking from experience here having made the saltiest buttermilk pancakes ever (long story)… That’s where I think ‘The New Girl’ went slightly awry for me. Everything was there that made ‘The Mall’ and ‘The Ward’ essential reading; the focus has shifted though and ‘The New Girl’ isn’t the same for it.

That’s not to say that ‘The New Girl’ doesn’t have cool stuff going for it. While the book wasn’t one that I couldn’t put down, it was still a book that posed interesting questions where I had to find out the answers. There is a lot of stuff going on that affects the lives of Ryan and Tara in some deliciously unsettling ways and it’s these moments that power the plot forward in just the right ways (even if jumps in perspective force the reader to go back and repeat stuff from a different viewpoint). ‘The New Girl’ is an incredibly easy book to settle into in that respect; it flows very smoothly and takes you along with it. Ryan Devlin is also an interesting character to have centre stage. While his abusive past is hinted at enough for us to see him for what he is, Grey really opens up Ryan’s thoughts and shows us motives that, while twisted, force us to consider Ryan in a new light. The ‘morality’ of Grey’s setting means that Ryan will eventually be punished for his crimes but you can’t help but wonder if it’s a happy ending for all concerned.

It did feel like things went astray though. With two previous books already having established the ‘weirdness’ of Downside, and how this can be horrifying when faced for the first time, it was perhaps inevitable that this setting would lose some of its punch by the third book. That ‘punch’ is lessened further though by the new direction this book takes. Instead of having ‘Downside’ discovered by us, Grey has the denizens of Downside actively seeking to make contact with ‘Upside’ in order to further their own agenda. Admittedly, this agenda results in some horrifying imagery but Grey’s writing strength lay in holding ‘Downside’ up as a mirror and forcing us to confront what’s inherently odd about our own society; it doesn’t work the other way round. We already know that ‘Downside’ is twisted’ so using our world as a mirror to highlight that is kind of pointless really and the end result feels strangely muted (although the ‘New Girl’ herself does come across as completely out of place when compared to her classmates). This feeling carries through to the rest of the book where , despite all the other good stuff, things feel a little bit directionless. This may be resolved in future books, where the direction becomes more clear, but for now it’s an infuriating thing to deal with when it feels like Grey was a lot clearer on this in the previous two books.

‘The New Girl’ is an odd one to call then. Like I said, all the ingredients are there but they’ve been used differently and the end result feels like ‘The New Girl’ isn’t the book that it could have been. Maybe this new direction will make a bit more sense in future books; I’m still a fan of the setting so will be around to see where things go next.
Posted by Graeme Flory at 13:22

Email ThisBlogThis!Share to TwitterShare to FacebookShare to Pinterest
Labels: 2013, horror