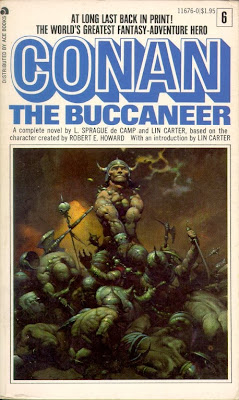 It really didn't take that long did it? There has always been something about my commute that makes me want to escape into a genre novel, mostly fantasy ones. I won't go too deep into the details of my commute (if you live in London you will automatically know what I'n talking about anyway); lets just say that it's safer for all concerned if I let some literary creation swing his sword around instead ;o)
Which kind of neatly brings me to this latest Conan review. I've somehow found myself collecting the old Conan books, with gorgeous looking covers, that weren't written by Robert E. Howard at all. The ones where other writers took it on themselves to fill in the gaps in Conan's life. We've already had 'The Road of Kings' here, now it's the turn of a book written by the two men who basically kicked the whole 'filling the gaps' thing off. I’ve pinched the blurb from Wikipedia…

Conan, now in his late thirties and captain of the Wastrel, becomes embroiled in the politics of the kingdom of Zingara when he seeks the rumored treasure on the Nameless Isle. The fugitive Princess Chabela, the privateer Zarono, and the Stygian sorcerer Thoth-Amon are among those mixed up in the treasure quest.

I seem to be into summing up books in one word, at the moment, and todays word is 'perfunctory'. 'Conan the Buccaneer' does everything that a Conan tale should but feels like it has been assembled rather than created. Take one barbarian warrior and a king who is being controlled by sorcery; add a princess in danger, from said sorceror and an evil rogue, and a tribe ruled by cruel Amazon women. Throw it all in a pot and sprinkle with sex, you have one 'Conan the Buccaneer'; a book that's linear, and a little too straightforward, in its approach.

That's not say 'Conan the Buccaneer' isn't a fun book; it is although the casual racism coupled with Conan's sexual prowess does its best to derail things. There's plenty of stuff happening and at least one indestructible monster that Conan must pit his wits against.In some ways you can't ask for a lot more than that from a Conan tale; Lin Carter even argues, in his introduction that this is the whole point of this and other Sword and Sorcery tales. While I agree with what Carter says on the whole, I find myself disagreeing in the case of this book. Sword and Sorcery is about telling an exciting story, above all else, and this is something that Carter and de Camp seem to have forgotten in their eagerness to line up all the ingredients in the right order. Some of the energy is here but there is surprisingly little heart to be found. 'Perfunctory' and 'by the numbers' doesn't cut it when you're dealing with Conan and I was left more than a little disappointed by the end. I'll still be collecting the titles though, just hoping for better things here on in.
Posted by Graeme Flory at 09:56

Email ThisBlogThis!Share to TwitterShare to FacebookShare to Pinterest
Labels: 2013, fantasy