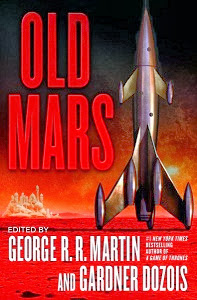 My reading being the way it is right now, it's very unlikely that you'll see an anthology reviewed here in its entirety. I'm more likely to dip in and out of collections, reviewing a short story here and a short story there; at least until I get a spare couple of hours to sit down for some serious reading time.

I used to love watching the old Flash Gordon shows on a Saturday morning (they were repeats on TV, I'm not that old...) so I was instantly interested in Martin and Dozois' latest anthology. Those guys are prolific aren't they?
Where was I? Yes, 'Old Mars'... We're not talking about the Mars of someone like Kim Stanley Robinson, all sterile and waiting to be terra-formed, this is the Mars that we all wished for as kids; majestic and brimming with the possibility of adventure. In case you're still not sure, there's a picture of an old school ray gun on the back. Yep, we are all about the pulp here.

So where to start then? A quick look at the contents and there was really only one option. I (still) have Michael Moorcock's 'Mars' books waiting to be read so 'The Lost Canal' looked like a great way to get accquainted with what Moorcock can do in this setting. As it turned out, 'The Lost Canal' is actually set thousands of years later (and possibly in a slightly different strand of the Multiverse) but it was still a lot of fun to read, albeit with a small reservation...

Mac Stone is a man on the run across the deserts of Mars, for reasons that he is unaware of. The answer lies under his feet, amidst a secret kept for thousands of years. The clock is ticking though and if Stone cannot evade capture then the future of Mars itself is at stake...

If you follow this blog then the odds are that you followed the last blog and know that I am a big fan of Michael Moorcock; a man who has the happy knack of writing pulp sci-fi and fantasy that makes you think at the same time. There’s a real sense of adventure in Moorcock’s writing that, coupled with engaging characters, will always keep me reading. That’s very much the case here with a high stakes scenario being played out by a character that you can’t help but feel sympathetic towards as he has no idea why he is in so much trouble. The answer is another clever hook, to engage the reader, that really opens up the history of Moorcock’s Mars (tying it into earlier works I think) while at the same time making it clear what the threat is in the ‘here and now’. A bomb, from a million years in the past, set to blow up the planet in seven hours time. I wasn’t too sure about that by the way; if the scientists of the past knew where the bomb was and how to deactivate it, why are they calling someone from the future to do the job? I’ll need to go back and re-read those passages I think. While I wasn’t sure about that, there’s still a real sense of urgency here that powers the plot forward in just the right way. Moorcock rounds things off in style with a chase through ancient catacombs followed by a tense and (literally) explosive finale. There’s even a little time for Mars to fall back into the hands of the people who really love it, giving the reader some hope for the planet’s future. It felt like a fitting way for the story to end.

The only other real issue I had here was with the amount of background history Moorcock gives us for Mac Stone and Mars itself. While I love getting into a character’s head (and here, Mars is as much a character as Mac is) it did feel, at times, as all that background took precedence over the plot. This imbalance was unfair on the plot as it ended up feeling a little more lightweight than it actually was. ‘The Lost Canal’ was still fun to read though, a nice little way to spend the commute to work.
Posted by Graeme Flory at 11:43