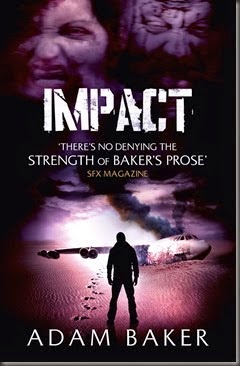 The world is overrun by an unimaginable horror. The few surviving humans are scattered in tiny outposts across the world, hoping for reprieve - or death. Waiting on the runway of the abandoned Las Vegas airport sits the B-52 bomber Liberty Bell, revving up for its last, desperate mission. On board - six crew members and one 10-kiloton nuclear payload. The target is a secret compound in the middle of the world's most inhospitable desert.


All the crew have to do is drop the bomb and head to safety.
But when the Liberty Bell crashes, the surviving crew are stranded in the most remote corner of Death Valley. They're alone in an alien environment, their only shelter the wreckage of their giant aircraft, with no hope of rescue. And death is creeping towards them from the place they sought to destroy - and may already reside beneath their feet in the burning desert sands.

Despite a couple of small dips along the way, I'm looking at you 'Juggernaut' don't pretend that I'm not, I've been a big fan of Adam Baker's post-apocalyptic thrillers (does the series have a name?) which are easily the most bleak and apocalyptic books I've read. This is a world where the only hope is false hope, even death won't save you once the virus takes hold. Looking at those last few words, I think what also appeals to me about these books is that they have gone far beyond your regular run of the mill zombie novel and into some strange area of SF that comes complete with its own intriguing possibilities. Have you ever read a book where the alien virus has ideas other than infecting the populace? Welcome to 'Impact'…

We're four books into the sequence now and in some respects, Baker doesn't really do a lot that is new. A group of survivors are stranded in one of the most inhospitable environments in the world as the world dies around them; at first just in the background and then right up close and personal. You could take that sentence and apply it to any one of the preceding books. There is a sense of 'if it isn't broke…' here; Baker has got the mixture of danger, high stakes and tension pretty well refined and the end result works even if it is becoming a little formulaic now. Good news then for fans of the first three books who might not want anything to change; you know what you are getting and that leaves more time to chill out by the pool while on holiday.

Not such good news for someone like me though who has enjoyed the preceding books but did have issues with 'Juggernaut' in particular. As with that book, I just found there to be too much desert in 'Impact' which rather focuses the attention on the fact that, for large chunks of the book, nothing actually happens. To be fair, the characters can't do anything apart from wait to see whether they are rescued before they die (and are conserving energy etc), they're stuck in Death Valley! It does make for (the wrong kind of) slow reading at times though and that's not what you want when you have been promised bigger and better things.

Baker does ultimately deliver though. Those creeping moments beneath the sands of Death Valley are cleverly drawn and shed a little light on what direction Baker is taking the virus in. Action may be sporadic but it's brutal when it happens and clearly illustrates a world that has gone past the tipping point and is heading into oblivion (the events of 'Impact' take place just before/during those of 'Terminus').

It's those moments of revelation that really make the book though. Are we dealing with a virus or something far more complex that may have ideas of its own? All I'll say is that there had better be another book, just one more, so we can have a little closure with that. And when you find out the reasons behind the doomed mission it just casts the whole book in an entirely new light. Human failures led to the apocalypse and human selfishness will ensure that there is no way back. Seriously, you have a nuclear bomb to use against a rampaging techno-virus and that's the first thing you think of doing with it? Baker makes his point crystal clear and leaves you wondering whether we will actually deserve the end when it happens. Okay, so maybe not a book to read by the pool after all (I finished the book and wanted to find a puppy to cuddle…)

These books can be read in any order (from what I can see) so newcomers should be able to pick up 'Impact' and just get going with it (although I'd say start with 'Outpost', my personal favourite). They'll have a great time with it as well, 'Impact' overcomes its issues to deliver a tale that is worth staying with right until the very end. It really does go out with a bang...
Posted by Graeme Flory at 22:44