I found this on the Tor UK Blog and it seemed like just the right time to share as I've been reading 'Drakenfeld' these last couple of days (with a little break for Adam Baker's 'Impact'). If you haven't seen this already, have a look... 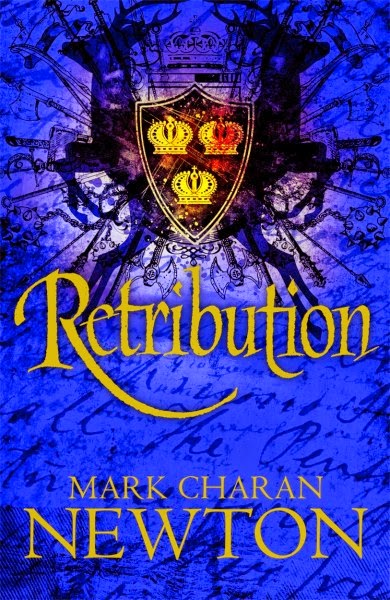 This seems like an odd thing to say but I'm not too keen on the blue background; makes it hard to see the writing and the detail behind the shield. If I'm being honest, it looks like someone has sneezed black ink on some poor unsuspecting book... I do find myself more and more appreciative of a good font though (no idea of what that's all about...) and I love the swirls on display here. What? 'Swirls' is a perfectly serviceable technical term (ahem...) What I'm not so keen on is the cover as 'fantasy camouflage', something that you wouldn't be afraid to be seen reading on the train to work. I can see why it's done like this but it still makes me feel a little sad.


WHEN JUSTICE FAILS, REVENGE FOLLOWS... Having just solved a difficult case in his home city of Tryum, Sun Chamber Officer Lucan Drakenfeld and his associate Leana are ordered to journey to the exotic city of Kuvash in Koton, where a revered priest has gone missing. When they arrive, they discover the priest has already been found - or at least parts of him have.

But investigating the unusual death isn't a priority for the legislature of Kuvash; there's a kingdom to run, a census to create and a dictatorial Queen to placate. Soon Drakenfeld finds that he is suddenly in charge of an investigation in a strange city, whose customs and politics are as complex as they are dangerous.

Kuvash is a city of contradictions; wealth and poverty exist uneasily side-by-side and behind the rich façades of gilded streets and buildings, all levels of depravity and decadence are practised.
When several more bodies are discovered mutilated and dumped in a public place, Drakenfeld realizes there's a killer at work who seems to delight in torture and pain. With no motive, no leads and no suspects, he feels like he's running out of options. And in a city where nothing is as it seems, seeking the truth is likely to get him killed . . .

And did I mention that the link, at the top, also leads to a chance to win a copy of 'Drakenfeld'? I have now :o)
Posted by Graeme Flory at 20:51