You would not believe the week I've just had. What? You might? Fair enough, I feel for you though. Do you mind if I just unload a little? Cool :o)

This week has seen me interview for two jobs (didn't get one, waiting on the other), one of which came with 'Added Bee Attack!' as I was walking back to the station.On top of that, I'm trying to get my head round a college course that I've just started while trying to help out my heavily pregnant wife (only a few weeks to go) and my daughter who is dealing with her own stuff right now (really doesn't want to be left on her own at nursery). I wouldn't swap any of it (ok, I would totally swap the mad bee attack) but I am so glad this week is over :o)

I haven't been able to get a lot of reading done this week (see above) but this week was the week when what seemed like ALL THE BOOKS turned up at my door. There are books that won't be read so I thought I'd give them a break and show them off with the books that will be read. Have a look at these... 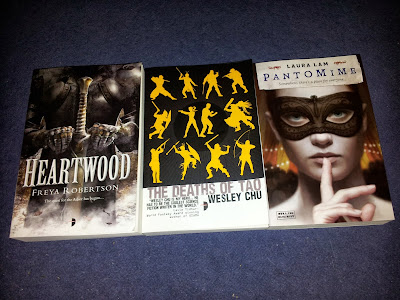 I love knights in armour so 'Heartwood' will definitely be read at some point this month. 'The Deaths of Tao'? It looks brilliant but I'm haven't read the first book and am wondering how much I would need to. Can anyone help me there? 'Pantomime' is a definite read, not only because I don't read enough YA but the phrase 'remnants of a vanished civilization' really caught my eye when reading the blurb (I was already keen when I heard Laura read from the book at her Forbidden Planet signing). 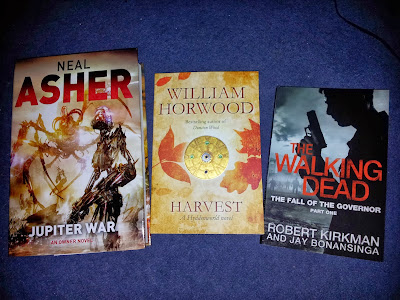 Funny isn't it? I won't be reading 'Harvest' as I haven't read the previous books but I'll more than likely pick up 'Jupiter War' even though I haven't read the first book. I know what Neal Asher's about and I think 'Jupiter War' is just what I'm after. I'll definitely be reading 'The Fall of the Governor' though, just to see how they can flesh out a story that has already been told in the comic book... 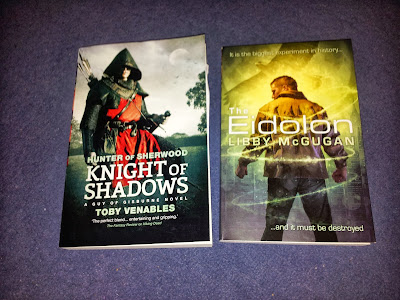 I love what Abaddon have come up with, in the past,  so I was really glad to see 'Knight of Shadows' on the doorstep. The blurb promises a nice little spin on a legend and I always thought that Guy of Gisburne had the coolest name in Sherwood Forest so... count me in there :o)
I'm not too sure about 'The Eidolon' though. While I want to give it a go, it's not a priority read like some of the other books here. We'll see what happens. 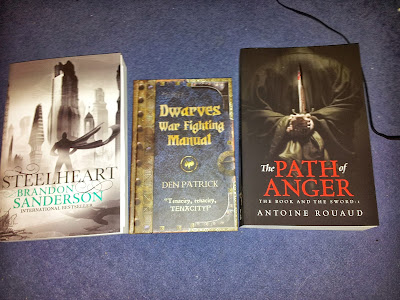 I might read 'Steelheart' but really don't know. Sanderson has some amazing ideas but there's something about the execution that never sits brilliantly with me. The 'Dwarves War Fighting Manual' will definitely be read though as will 'The Path of Anger'. This last title is particularly intriguing as I have never come across Rouaud's work before (something to do with the fact that my French stops at 'ou est la pomme de terre?') Has anyone else read his books? 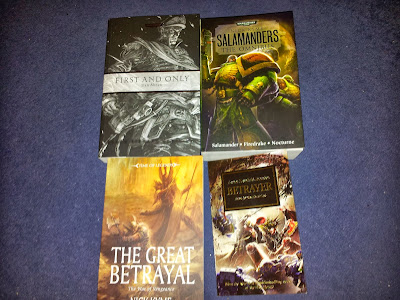 Now I love it whenever a Black Library package arrives as not only am I a fan but it's all (generally) very well written and I'm guaranteed at least one good read. I've spoken about 'First and Only' and  two thirds of the 'Salamanders Omnibus' on the old blog so you won't see them mentioned any more here. Well, you might if I decide to read 'Nocturne' (maybe). It's physically impossible for Aaron Dembski-Bowden to write a bad book so I have 'Betrayer' on the go already and I'll be reading 'The Great Betrayal' as the Warhammer fantasy books don't get talked about so much and I want to do something about that.

Any of these books take your fancy? Reviews will happen when they happen but expect to see the bulk of this lot covered at some point. Anyway, that's me done for the day. I'll see you guys tomorrow for some more of the same ;o)
Posted by Graeme Flory at 21:54