As 2013 starts to look like drawing to a close, advance copies for 2014 start to arrive at the door. I'm still a little behind all the other bloggers talking about these books (like Justin for example) but it's still worth doing a little 'heads up' post here and there; especially with a book like this... 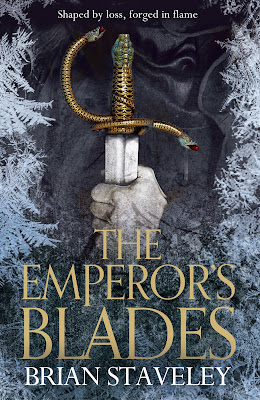 The Emperor has been murdered, leaving the Annurian Empire in turmoil. Now his progeny must bury their grief and prepare to unmask a conspiracy. His son Valyn, training for the empire’s deadliest fighting force, hears the news an ocean away. He expected a challenge, but after several ‘accidents’ and a dying soldier’s warning, he realizes his life is also in danger. Yet before Valyn can take action, he must survive the mercenaries’ brutal final initiation.

Meanwhile, the Emperor’s daughter, Minister Adare, hunts her father’s murderer in the capital itself. Court politics can be fatal, but she needs justice. And Kaden, heir to the empire, studies in a remote monastery. Here, the Blank God’s disciples teach their harsh ways – which Kaden must master to unlock their ancient powers. When an imperial delegation arrives, he’s learnt enough to perceive evil intent. But will this keep him alive, as long-hidden powers make their move?

Even though I don't have the time to read as much 'Fat Fantasy' as I used to, I still can't get enough and every time I see a title like this I'm immediately intrigued. Tor UK have good form for fantasy (Tchaikovsky, Newton, Buchanan and Hulick...) so I'll definitely be reading 'The Emperor's Blades' in the next couple of months. If you're wondering, Tor UK will be publishing 'The Emperor's Blades' in January 2014; absolutely no idea when the US edition will arrive (help?)