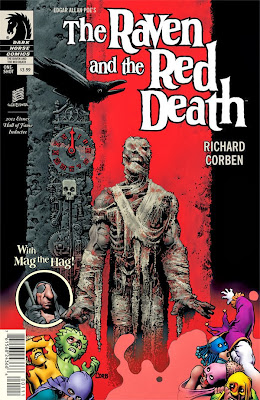 I was already a fan of Richard Corben's art from his brief stint on 'Conan' but it was the chance to see him tackle gothic horror in greater detail, in 'Ragemoor', that really sold me on just how good he is. If you haven't read 'Ragemoor' yet then you really need to do something about that. Trust me :o)

With all this in mind then, I can't think of anyone else more suited to adapt Poe's 'The Raven' and 'The Masque of the Red Death' to a comic book format. If you can then let me know but in the meantime, just pick up this comic book and enjoy some absolutely gorgeous art that really captures what these tales are about.

Corben's work really captures the sense of growing menace in 'The Raven' as well as Arnold's horror when he realises the truth about Lenore and what this means for him personally. While Corben pays homage to the real master behind this work, 'The Raven' is all about his art telling an engrossing story not so much through words but through the expressions on Arnold's face. It's gripping stuff and I found myself holding my breath at times (and that is one scary raven at the end...)You can't deny the power of Poe's verse though and while it is used sparingly here, this approach somehow seems to make those words even more intense.

'The Red Death' really allows Corben to go to town with the stark contrast between Prospero's party and the fate of the peasants outside the abbey. Corben's imagination is really let loose here and you can't help but ask which element of the tale is the more horrifying, the grotesque deaths of the peasantry or the grotesque cartoonish excesses of Prospero's party. All of this builds up to an amazing crescendo where Corben introduces even more horror to the proceedings with the introduction of the Red Death itself. It's a brilliantly executed moment (especially with its aftermath) and you can almost forgive the tale for losing a little impetus after this climax. After all, where else is there to go from here?

I read this adaptation in pdf format but 'The Raven and The Red Death' is so eye catching that I wouldn't be surprised if I ended up buying a copy for my shelf. If you're after a little horror, in your comics, for Halloween then I would totally recommend you pick this book up. As for me, I'm off to read 'Ragemoor' again while I wait for this comic to arrive at Forbidden Planet.