Anyone Fancy A Big Box Of Books (With Tiny Caveat...)?

I'm trying to be a lot more strict with myself about what stays on the shelves these days. If new stuff comes into the house then I'm really trying to balance that out with stuff headed in the other direction. There were loads of books that I realised I would either never re-read or, in some cases, read at all. I want my bookshelves to be all about books that I want to keep coming back to so... 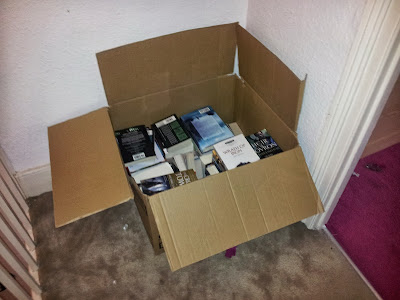 I don't know how many books I've got rid of here but they're all in good condition (like I said, some haven't even been opened) and I reckon they could make someone a pretty good Christmas present. So, would you like this box of books?

Before you get too excited, I did mention something about a caveat... I don't have the money to post this box anywhere so you'll need to come and pick it up (it's worth it). That pretty much limits this to anyone living in London who either has a car or a couple of large suitcases. If you fit the bill, drop me a line at graeme@graemesfantasybookreview.com (yep, I need to sort out a new email address) and we'll sort something out. First email gets the box, I'll leave it about a week or so then these books will start going to the charity shop.

And by the way, don't worry about coming to the house of some strange guy from the internet. The worst that can happen is Hope doing her impression of a bouncing bomb (she was watching 'The Dambusters' the other day).

I've just seen some more books that need to go in the box so I'll see you all tomorrow ;o)
Posted by Graeme Flory at 16:39