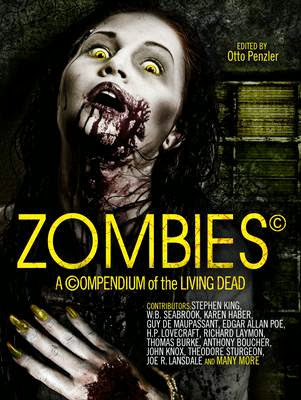 'And so it was Jill's dearest and most secret wish came true. She was having a baby with the president.'

The introduction to 'Maternal Instinct', as read in Otto Penzler's 'Zombies' compendium, notes that Bloch 'commonly created a short story by inventing a good pun for the last line, then writing a story to accompany it.' Having read this, I immediately jumped to the last line (of course) but didn't get the joke at all. Then I read 'Maternal Instincts' all the way through and that ending takes on a whole new meaning which left me gasping. I reckon you'd feel the same way.

'Maternal Instinct' charts a debate on how to combat a zombie epidemic but becomes a lot more when said epidemic casts light on a group hiding behind the epidemic and using it for their own ends. I'm trying my hardest not to give too much away here as you should give 'Maternal Instinct' a read and experience that final line for yourself...
To be honest, that little spin really saved the story for me as Jill's introduction and the debate itself came across as a little too dry and rather uninteresting (although Jill's introduction does set up that final line nicely). I don't know if this was done deliberately or not but there was a point where it was only the promise of zombies that kept me going.

I'm glad I did. Bloch offers a nice little spin on the zombie apocalypse and caps it all off with a killer ending that is a lot more graphic when placed in context.
Posted by Graeme Flory at 16:15