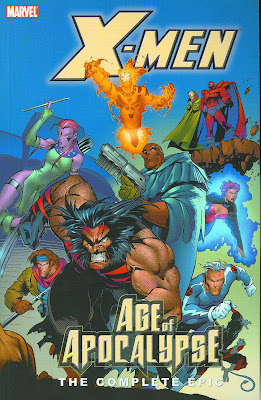 On days like yesterday, when it was actually too hot to read a book, I thank the good people at Marvel, DC, Image and Dark Horse (amongst others) for giving me comic books to read. Good stories, great artwork (most of the time); you can’t ask for too much more than a comic book to go with that ice cold beer you are stirring yourself to get from the fridge :o)

Yesterday was all about the classic X-Men story line ‘Age of Apocalypse’, one of the first comics I picked up at college and the comic that had me searching out more to read. Well, I say ‘story line’ but it’s more like a quarter of the storyline as I’m now collecting it in trade. And I’ve started reading at Volume 2 as Amazon told me that’s where the story actually starts; Volume 1 being more along the lines of ‘filler’ stories that plug the gap between ‘Age of Apocalypse: Prelude’ and the main event.
Whatever, ‘Volume 2’ is an absolutely awesome read and was a fine way to pass some time in the sun (never got that ice-cold beer though).

For those of you who don’t know the story, ‘Age of Apocalypse’ is an alternate timeline where Professor Xavier died twenty years ago (killed by his son) and Apocalypse rose to power, turning North America into a wasteland and killing those he deems too weak to survive. Magneto now leads the X-Men in a series of desperate rear guard actions designed to save as many human lives as possible. At Apocalypse’s side stands Cyclops, Havok and the Beast, all currying favour for a role in Apocalypse’s new world order. Treachery is stirring in both camps though and who is the man called Bishop? A man out of time and with visions of a world where Professor Xavier never died…

‘Age of Apocalypse: Volume 2’ takes everything you ever knew about the X-Men and turns it all completely on its head. Not only that, it then proceeds to throw everyone against each other with the kind of earth shattering power that you would only expect to find in one of the ‘Big Two’ comics. There’s nothing too deep here in terms of plot, not only because of this but also because things are clearly being set up to play out in future volumes.  That’s not a huge deal though, not when you have a whole bunch of super powered mutants going up against each other and not pulling any punches.

If you’re after ‘deepness’, this comes in those quiet moments (between battles) when people are able to step back and just be themselves for a rare moment. The most interesting character in this respect is Bishop, a man whom (when he is not fighting for survival) is struggling not to go insane with memories of a time that cannot be. Those opening scenes of Bishop climbing across a mound of corpses really lay it on the line regarding just what he has to deal with on a daily basis. There is also the relationship between Magneto and Rogue and how this has driven Gambit off and… There’s the problem really. A lot of this will only have an impact if you’re a fan and know even a little about previous X-Men history. The story on its own is more than enough for the casual reader, especially with how well it’s drawn. You do need that background knowledge though if you are going to get the most out of the book.

Like I said, Volume 2 is really about laying the foundations for events to play out down the line. The way the book goes about it though is a lot of fun and even though I was going to be around to see this one conclude (gaps to fill in etc) the way Volume 2 treats its subject matter would have persuaded me anyway. I just need to be able to afford to buy those volumes but that’s another story…