So today just got a little more awesome...

Not that today hasn't been good in it's own way (pancakes and Hope being a 'Pink Jedi'...) but when a book like this pops through the door... Well, everything just jumps up a notch :o) 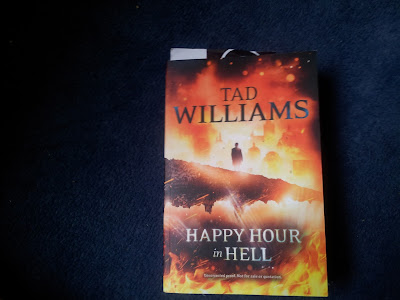 Bobby Dollar has a problem or four of epic proportions. Problem one: his best friend Sam has given him an angel's feather that also happens to be evidence of an unholy pact between Bobby's employers and those who dwell in the infernal depths. Problem two: Eligor, Grand Duke of Hell, wants to get his claws on the feather at all costs, but particularly at all cost to Bobby . Problem three: Bobby has fallen in love with Casimira, Countess of Cold Hands, who just happens to be Eligor's girlfriend. Problem four: Eligor, aware of Problem three, has whisked Casimira off to the Bottomless Pit itself, telling Bobby he will never see her again unless he hands over the feather.

But Bobby, long-time veteran of the endless war between above and below, is not the type of guy who finds Hell intimidating. All he has to do is toss on a demon's body, sneak through the infernal gates, solve the mystery of the angel's feather, and rescue the girl. Saving the day should just be a matter of an eon or two of anguish, mutilation and horror.

If only it were that easy.

I've been a big fan of Tad's books since I came across a copy of 'The Dragonbone Chair' in nineteen eighty something or other (feeling old...) and he hasn't let me down since. I have a couple of books that I want to review first but don't be too surprised if this one pops up in the next couple of weeks (if not a little sooner). The day may have just peaked, in terms of awesomeness, but that's ok. I now have something to treat myself to once I've finished writing my latest 'Black Company' post.
Posted by Graeme Flory at 12:15