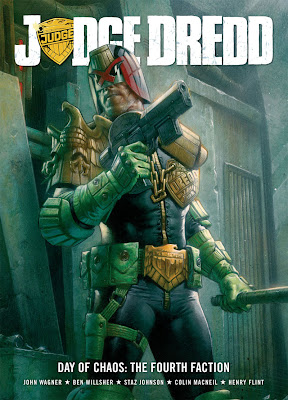 Sometimes comic book continuity can really trip you up (I'm looking at you Marvel) but, on the whole, I'm a big fan of storylines that can be traced right back into the dim and distant past. Just as long as the 'present day story' is still fairly accessible.
A lot of what has happened in the world of Judge Dredd can be traced back to events arising from the Apocalypse War and Dredd being directly responsible for the death of an entire Russian mega-city. Even though 'they started it first', that's still a hefty death toll to place on one man and Sov revenge has been in the offing for something like the last thirty years...

The 'Day of Chaos' storyline is the tale of that revenge; a tale that will eventually leave Mega City One utterly broken and in, well... chaos. It's interesting then that this first volume seems to shy away from that plotline entirely, relegating it to equal status with other tales of crime and mayhem in the Big Meg. I get the reason behind this approach, the 'slow build up' is a great way to really spring an earth shattering event on readers and, in this instance, it's also an effective way of showing that the Big Meg is in a bad enough state already. I'm just not sure that the approach works when the stories are all collected in trade like this, not when the headline event doesn't really get top billing... Or maybe it does, I'm totally undecided at time of writing :o)

It's a good job then that 'The Fourth Faction' carries some very strong supporting stories,
presented by heavyweights such as John Wagner and Henry Flint. I've become a bit of a fan of Ben Willsher's art as well which really captures some of the harsher aspects of Mega City One. But anyway, the stories.

Any tale where Dredd brings law back to the streets is an essential read and it's no different here. Dredd's typically heavy handed methods effectively illustrate the totalitarian regime while criminals he faces show why such methods are justifiable. Or are they? That's the debate and I come down on the side of 'yes'; when you have a man skinning fellow citizens to make clothes what else can you do but shoot first? Especially if he has you marked down for a nice suit?

There's also the return of fan favourite P.J. Maybe, serial killer amd former mayor of Mega City One. While there's no surprise in his escape, the real fun comes in watching him constantly stay one step ahead of the Justice Department through clever use (he would say genius!) use of face changing technology. Here is a character who has been nicely placed to do big things when the main event kicks off.
Talking of which, the Sov agent's mission is perhaps a little too understated for me but does raise an interesting ethical question for the senior judges (and by extension, us) to ponder. That we already have a pretty good idea where things are headed just lends a nice sense of inevitability to it all.

I always seem to have my doubts about the effectiveness of collecting 2000AD stories in trade and 'The Fourth Faction' is no different. When you look at each story individually though there is a lot of good here and I will definitely be posting my thoughts on the next trade 'Endgame'.