So I've just looked and realised that I haven't posted anything here since last Tuesday (and I am horribly, horribly late with my next Black Company post for Tor.com); time for an update then :o)

It's been a mad crazy week what with one thing and another. Wednesday saw me being interviewed for a job; it didn't go too badly but there were lots of other candidates in the queue behind me... We'll see how that one goes (fingers crossed) Thursday saw me head off to the job centre to be told that I'm going to be investigated because I missed a course to attend said interview... Still a bit grumbly about that one but an epic lightsaber battle with Hope, in the back garden, went a long way towards making me feel better :o)
And yesterday was far too nice to do anything apart from listen to some free music being played at the Royal Albert Hall before going to Kensington Gardens and finding what must be the best playground in the whole of London. Any playground that has a massive pirate ship to play on (erm... for the kids of course) pretty much wins at everything in my book.

The weather looks like it is going to be gorgeous for the next week, at least, so posts might well be a bit thin on the ground as I'll be taking Hope out more and (hopefully) attending interviews. That's what this blog is about though; less posts but hopefully better quality ;o)

'Short Story Sunday' will be here tomorrow but until then, have a look at some books that arrived in the post over the last few days... 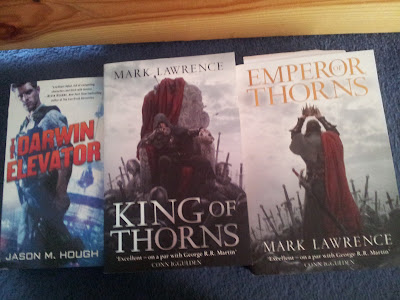 'King' and 'Emperor' arrived as I have finally (finally) read 'Prince of Thorns'; it was awesome and I didn't want to hang around getting hold of the next two books. There will be a review some time this week. 'The Darwin Elevator' turned up unsolicited and is looking like the kind of fun, summer read that weather like this demands. Can't tell you when I'll finish it but 'The Darwin Elevator' will get a review here as well. Have some blurb,

In the mid-23rd century, Darwin, Australia, stands as the last human city on Earth. The world has succumbed to an alien plague, with most of the population transformed into mindless, savage creatures. The planet’s refugees flock to Darwin, where a space elevator—created by the architects of this apocalypse, the Builders—emits a plague-suppressing aura.

Skyler Luiken has a rare immunity to the plague. Backed by an international crew of fellow “immunes,” he leads missions into the dangerous wasteland beyond the aura’s edge to find the resources Darwin needs to stave off collapse. But when the Elevator starts to malfunction, Skyler is tapped—along with the brilliant scientist, Dr. Tania Sharma—to solve the mystery of the failing alien technology and save the ragged remnants of humanity.

I was a little worried that this might be another zombie story but I've been pleasantly surprised so far. That's me for today then. Have a great one, whatever you're up to, and I'll see you all tomorrow :o)