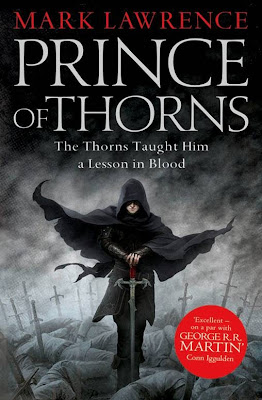 If you cast your mind a couple of years ago you'll remember that every man and his blog were all singing the praises of Mark Lawrence's debut novel 'Prince of Thorns'; everyone apart from me that is. It wasn't that I didn't enjoy the book, I just couldn't get into it far enough to decide one way or the other. When the focus shifted onto the sequel, 'King of Thorns', I was still stuck on the starting line and slowly coming to the conclusion that perhaps some books just aren't meant to work for certain people.

Fast forward to a couple of nights ago... It's three in the morning and I've already been awake for an hour with little chance of going back to sleep. That's ok though, I've been itching to find out how 'Prince of Thorns' ends (couldn't put it down the day before) and now I have the ideal opportunity to polish off those last few pages.
So what happened there then? I'll tell you in a minute but what I'll say now is that I really regret not pushing on with 'Prince' two years ago amd finishing it then. I missed out on some superb reading then but at least I get to play catch up now. If the next books are as good as 'Prince' then it won't exactly be a chore.

I'm pretty sure that I must be the last person to read 'Prince of Thorns' but, just in case there are any other stragglers, here's some blurb to kick things off.


From being a privileged royal child, raised by a loving mother, Jorg Ancrath has become the Prince of Thorns, a charming, immoral boy leading a grim band of outlaws in a series of raids and atrocities. The world is in chaos: violence is rife, nightmares everywhere. Jorg has the ability to master the living and the dead, but there is still one thing that puts a chill in him. Returning to his father's castle Jorg must confront horrors from his childhood and carve himself a future with all hands turned against him.

You know what it's like. You're casually reading a book and your mind is on other things; what dinner will involve for example or (in my case) just exactly what will it take to find a job... And then it happens; a light goes on in your head and you can practically see the 'world of the book' opening up before your very eyes. Not only are you into the book but there is no way that you will be putting it down until you are finished. Well, that was me and 'Prince of Thorns', a thoroughly absorbing read that has to rank as one of the best debut fantasies I have ever read.

That's not to say 'Prince of Thorns' is a perfect read however. Jorg's life is under the control of an outside agency which makes for a nice little twist to the plot when you find out just why he has given up his search for revenge. An unfortunate side affect though (at least until you find out) is that Jorg is a little bit 'too good to be true'. The right decisions are made a little too easily and he enjoys more luck than perhaps he should (although given what his father does to him you could argue exactly the opposite). It's not a huge deal but can grate a bit.

And there's also the reason why I couldn't get into the book first time round. In my opinion, Lawrence reveals the real nature of his world a little too soon and not particularly subtly either (trying my hardest not to give too much away for those who haven’t read it). I would have liked to have seen more ‘slow reveal stuff’ (like the spirit in the mountain which was superb) rather than having famous philosophers etc thrown in just as the world building was getting interesting. The end result was my being jarred out of the read just as I was about to really get into it.

I’m glad that I stuck with it though as once Lawrence adjusts the pace of the ‘big reveal’ he paints a haunting and bleak world with some nice little echoes of King’s ‘The Gunslinger’; I’m hoping for more of this in the next two books.

Lawrence doesn’t just deliver with the world building either. ‘Prince of Thorns’ has a compelling plot that reveals hidden layers just as you’re starting to think that you’ve got the hang of it. There is a lot to get you hooked here and that bodes well for the next two books. ‘Prince of Thorns’ is perhaps light on the action but when the reader looks at the repercussions of what Jorg is doing then this becomes totally excusable. Jorg’s world is in a poor enough state as it is; Jorg’s actions could ultimately tear it apart all over again.

Which brings us to Jorg Ancrath himself, an incredibly strong lead character to hang a plot off and one that I am looking forward to following further. I would argue that Jorg is the complete and utter psycho that people have made him out to be; I certainly didn’t see any real evidence (over the course of the book) that he is the new heir to the ‘Grimdark Throne’. While it is true that Jorg is a damaged individual he is also a driven one who will do whatever it takes to achieve his aims. One of the reasons I hung around was to see just what he would do next; Jorg is a character who will surprise you but one that very rarely disgusted me with his actions (although that poor Bishop…)

‘Prince of Thorns’ is an amazing read then and one that I wish I had persevered with a couple of years ago. I won’t be hanging around so long with the next book (look out for a review next week in fact)…

Email ThisBlogThis!Share to TwitterShare to FacebookShare to Pinterest
Labels: 2013, fantasy