The Mediocre Cover Posts… ‘On the Razor’s Edge’ (Michael Flynn) 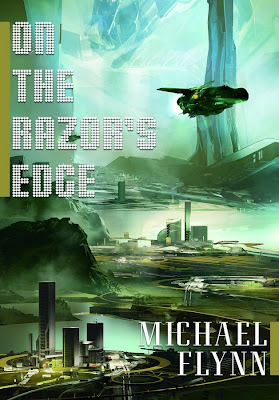 Is there really any such thing as ‘bad cover art’? I don’t think so… The whole point of a cover is to catch your eye and make you pick the book up. If a cover hasn’t been drawn particularly well yet still catches your eye enough to make you read the blurb, well… that’s half the battle won in terms of you getting your wallet out. The cover art has done its job well.

What I can’t stand is half hearted, mediocre cover art where your eye naturally drifts over it to find something more interesting. Where is the point in that? Especially in today’s market where selling books sometimes feels more important than ever.
Mediocre cover art doesn’t do its job, it’s just there so that the book doesn’t look like an advance copy of itself (even that would be better, loads of plain white is certainly eye catching). Covers like ‘On the Razor’s Edge’ really wind me up…

The title may be striking but having it made up of all those little dots? That just made my eyes want to move on as quickly as possible. The only problem is, what you’re left with is an uninspiring cityscape drawn with no depth whatsoever and a distinctly uninterested looking spacecraft just, well… hovering there really. And that’s the whole thing, there’s not a whole more you can say about it really over than… meh.
This is a real shame as the blurb does its job a whole lot better than the cover does.

The secret war among the Shadows of the Name is escalating, and there are hints that it is not so secret as the Shadows had thought. The scarred man, Donovan buigh, half honored guest and half prisoner, is carried deeper into the Confederation, all the way to Holy Terra herself, to help plan the rebel assault on the Secret City. If he does not soon remember the key information locked inside his fractured mind, his rebel friends may resort to torture to pull it from his subconscious.

Meanwhile, Bridget ban has organized a posse—a pack of Hounds—to go in pursuit of her kidnapped daughter, despite knowing that Ravn Olafsdottr kidnapped the harper precisely to lure Bridget ban in her wake. The Hound, the harper, and the scarred man wind deeper into a web of deceit and treachery certain of only one thing: nothing, absolutely nothing, is what it seems to be.

If it wasn’t for the fact that ‘On the Razor’s Edge’ is ‘book x in a series of y’ then I would be tempted to give it a go based on the blurb. As far as the cover goes though…