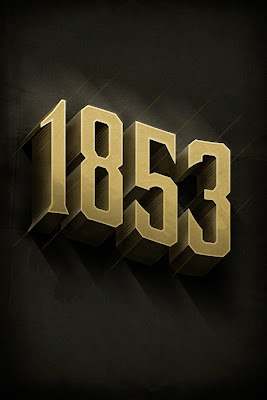 While I never seem to have the money to indulge in Jurassic London's rather lovely looking books (damn you mortgage and double damn you massive crack in the wall...) I will pick up their chapbooks as a free download. I was a little wary of '1853' at first, wondering how I was going to get the most out of this chapbook when I hadn't read the preceding 'Pandemonium'; especially as '1853' is meant to show us that the weirdness of that year wasn't just confined to one small town in the American west. Turns out that I didn't need to worry at all. You don't need to know anything about the setting that birthed '1853' (although I'm sure it would help) and you don't even really need to know that much (if anything) about the real life events the chapbook riffs off. All you really need is the ability to be entertained, for a few minutes, by good storytelling and we all have that, don't we?

'1853' is basically three 'snapshot' stories that show the reader a world where horror and weirdness can be as close as just past the corner of your eye. Pretty close then and Laura Graham shows you just how unsettling this can be with 'Island to Auld Reekie'. Something is killing the poor people of Edinburgh and the closest you ever get to it is a sound in the dark or a scratching on a tenement door. No-one knows what it is and you will share in that fear as you don't know either. Add in a masterfully abrupt ending and 'Island to Auld Reekie' becomes a superb read, hinting at a dark future all the more chilling as you can only guess at what it holds.

Jonathan Green's 'Bat out of Hell' decides not to play the long game that 'Island' excels at, opting instead to deliver a frantically paced burst of deadly pursuit, blood and the promise of more blood to come. When 'Bat out of Hell' is done that's it, there's no lingering aftertaste to dwell on afterwards. What you get in the meantime is more than enough though. You can tell that Green has previous experience of writing dark encounters in empty museums as he uses those dark shadows to hide some nasty stuff, revealing it all at just the right time...

Marc Aplin's 'Son Of' tells of a man faced with the toughest of choices, could you kill someone who might just be the son of God if it will save the lives of millions? Given that the story is clearly aimed at its conclusion (pardon the slight pun) I was left wondering whether the choice was that tough after all. What stays with me, even now, though is how Aplin takes that moment of choice (and the outcome) and slows it down into something that feels almost cinematic in its imagery and style. Nice work there Mr Aplin.

I could waffle on about how great '1853' is but I would say give it a read (free download and all that) and let it speak for itself; I think that you'll be glad that you did.

Email ThisBlogThis!Share to TwitterShare to FacebookShare to Pinterest
Labels: 2013