One for 2014 (Seriously, the last one this year)? Star Wars: Honour Among Thieves' - James S.A. Corey

Royal Mail may have given up for the last few days of the year but DHL are still doing business it would appear. We did feel very sorry for the very grumpy driver who arrived on our doorstep, complaining that he hadn't been able to drink over Christmas because he was working... (I had an extra one for him that evening)
Anyway, I've got a couple of posts planned for the next couple of days so this really will be the last 'One for...' post this year, promise. Go on, have a look at the cover and blurb... 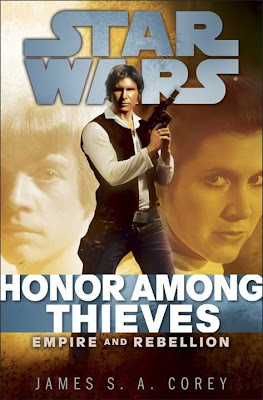 When the mission is to extract a high-level rebel spy from the very heart of the Empire, Leia Organa knows the best man for the job is Han Solo—something the princess and the smuggler can finally agree on. After all, for a guy who broke into an Imperial cell block and helped destroy the Death Star, the assignment sounds simple enough.

But when Han locates the brash rebel agent, Scarlet Hark, she’s determined to stay behind enemy lines. A pirate plans to sell a cache of stolen secrets that the Empire would destroy entire worlds to protect—including the planet where Leia is currently meeting with rebel sympathizers. Scarlet wants to track down the thief and steal the bounty herself, and Han has no choice but to go along if he’s to keep everyone involved from getting themselves killed. From teeming city streets to a lethal jungle to a trap-filled alien temple, Han, Chewbacca, Leia, and their daring new comrade confront one ambush, double cross, and firestorm after another as they try to keep crucial intel out of Imperial hands.

But even with the crack support of Luke Skywalker’s X-Wing squadron, the Alliance heroes may be hopelessly outgunned in their final battle for the highest of stakes: the power to liberate the galaxy from tyranny or ensure the Empire’s reign of darkness forever.

I'd pretty much given up on Star Wars books for a whole load of reasons that you've all heard before. Ok, recycled plots with the same old characters that the franchise won't allow to die (erm... zombie Star Wars?) 'Honour Among Thieves' could be different though, slotting somewhere in between 'Star Wars' and 'The Empire Strikes Back', meaning the characters won't feel quite so 'same old' then. If that wasn't enough, James S.A. Corey has got form for writing quality space opera and that's something the Star Wars franchise could really do with a good dose of. And if that wasn't enough, 'Honour Among Thieves' is only two hundred and forty six (and a bit) pages long; that makes it the ideal read for a couple of train rides to and from work. So yep, despite all my misgivings about Star Wars books in general I'll be giving 'Honour Among Thieves' a go and I reckon you'll hear my thoughts a little while before the March 2014 publication date.

How about you, will you be reading 'Honour Among Thieves'? And are there any new(ish) Star Wars books that you think could change my views on Star Wars books in general? Go on, leave a comment ;o)
Posted by Graeme Flory at 16:33