What, more comic books that I've been reading?

Yes, just a couple more at least ;o) The week just gone has been one of those weeks where not a lot of reading gets done. Understandable really, given that my youngest daughter is eight days old  (with all that entails) and my oldest daughter is growing just a little bit jealous. I wouldn't swap it for anything, I'm soft like that, but I have been really glad of the few minutes I've had where I could sneak off and read comics on my phone; especially when one of the ones I've just read is kicking off a series that I've wanted to see for years. 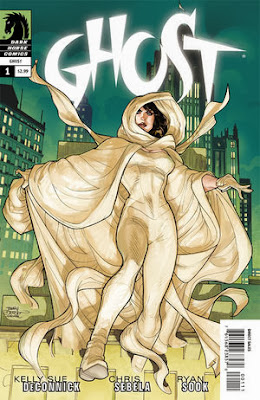 Yep, 'Ghost' is finally back albeit rebooted. The same kind of questions are being asked about Elisa Cameron's origins but this time the action takes place in Chicago rather than Arcadia. I still miss Arcadia, as it happens, and can't help but wonder why 'Ghost' couldn't stay where she was; especially given that the 'X' reboot does take place in Arcadia. Chicago is a pretty good substitute though it has to be said, in terms of the kind of imagery it throws up, and I think it will grow on me.
As a first issue, it wouldn't be fair to expect much more from 'Ghost' than what it gives us; introductions, questions to be answered and a liberal dose of action to get things rolling in the right direction. It's a mix that is handled very well by DeConnick and Sebela while Ryan Sook's delicate artwork hides its energy until just the right moments. I would probably have said this anyway but I will definitely be following 'Ghost' to see where the story takes me. 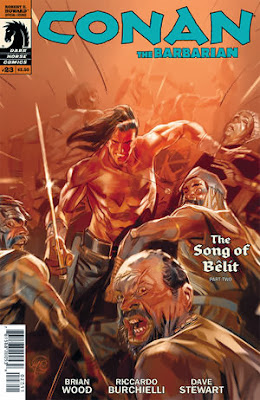 'The Song of Belit' is another case of my jumping into a 'Conan' mini-series at least one book too late; one day I'll get the timing right... Thanks to Brian Wood's script though, jumping on board with Part Two isn't as daunting as it looks; there's a little bit of scene setting and then Conan is left to do what he does best, just get on with it. I like this approach, especially with the added impact it lends to the surprise Conan is given partway through the book.
Riccardo Burchielli's art is nothing short of gorgeous by the way; a tiny bit cartoonish but really managing to capture the jungle atmosphere as well as the character of Conan himself. It's the kind of art where it almost doesn't matter if the dialogue is there or not, you could still follow the story either way. I'll probably never see the issue that began this story but I'll be sure not to miss the rest.

I'm always on the lookout for other comics to read by the way, any recommendations?
Posted by Graeme Flory at 11:26