How was your Christmas? Mine was pretty awesome thanks for asking :o) I watched ‘Lego Star Wars’ and ‘Spectacular Spiderman’ with Hope (while she wasn’t grinding pink playdough into our green carpet…) and spent a large part of the day cuddling Elana; I couldn’t have asked for a lot more than that really. Except that I did :o) It was Christmas, I had loads of Christmas lists doing the rounds! I am now well stocked up on DVDs, so much so in fact that I might have to cull some of my old DVDs that I haven’t seen in a while…. As things stand right now, you can expect to see posts on ‘Thor’, ‘Captain America’ and ‘Doctor Who: Paradise Towers’ (guilty pleasure time…) You might even see a post on the ‘He-Man and She-Ra Christmas Special’, I didn’t even know there was a He-Man and She-Ra Christmas special…
This post is all about the books though, and not just the ones I got for Christmas either. A few extra books snuck in via the post, a day or so beforehand, and I think they’re all worth mentioning so here goes… Christmas books first then, 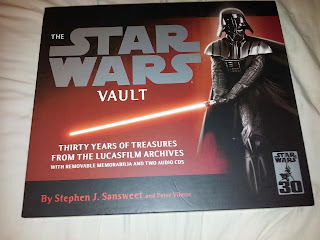 ‘The Star Wars Vault’ is full of all sorts of goodness , pretty much everything a Star Wars fan could want from the very quick flick through that I’ve had. There will be a more in depth post on this at a slightly later date I reckon. One thing I will say now though is that it’s the heaviest book I’ve ever held; anyone breaking into my house will be met with this book as I can see it working as an effective shield and weapon combined. Thanks to my little brother Chris for getting me this.
Well, there was going to be a 'Fantasy Masterworks picture here but the picture and blogger have apparently decided not to get on with each other; Christmas Spirit only lasts a couple of days I guess :o) What I'll do instead is say that I was given 'Peace' (Gene Wolfe) & 'The Iron Dragon's Daughter' (Michael Swanwick) by my folks (thanks!) and 'The Phoenix and the Mirror' by Sue's folks (thanks!) The rules clearly state (well they don’t but…) that I can break my ‘second hand bookshops only’ rule for Christmas’ and birthdays so there you go. I’ve still to read a full length novel by Gene Wolfe and ‘Peace’ looks like a nice quick(ish) read to address that shortfall, ‘The Iron Dragon’s Daughter’ looks interesting as well (especially after reading 'The Year of the Three Monarchs' and getting a feel for what Swanwick's writing can be like). I actually started reading ‘The Phoenix and the Mirror’ on the way to work this morning (yep, I had to go to work this morning…) and what I’ll say right now is that it’s the book I’ve been looking for without realising it. More on that when I post my review. 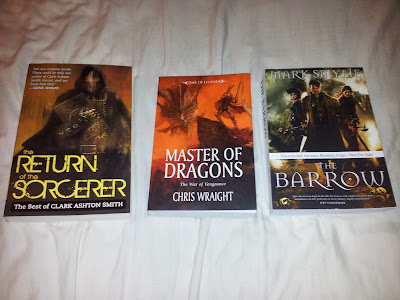 And here are the books that snuck in through the post before Christmas. Mark Smylie’s ‘The Barrow’ looks like a lot of fun and I can see it getting bumped up the pile once I’ve finished a couple of others. I know I said I was getting a bit tired of Warhammer 40K fiction but a) ‘Master of Dragons’ is Warhammer Fantasy and b) it’s written by Chris Wraight and I will read anything that he writes. I just need to read ‘The Great Betrayal’ first…
‘The Return of the Sorcerer’ is my admission that I will never find a copy of ‘The Emperor of Dreams’ for a reasonable price and it’s also a way of patting myself on the shoulder and saying, ‘there there, never mind’ :o) I’ll be dipping in and out of this book over the next few weeks.
And that was my Christmas in terms of books! I now need to go away and make some room on my shelves, the charity shops are going to be very happy with me I reckon. What books did you get for Christmas?
Posted by Graeme Flory at 11:57