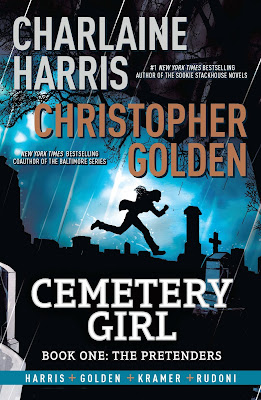 Me and Urban Fantasy/Paranormal Romance/Whatever You Want To Call It (I don't even know if there is a difference anymore) decided to go our separate ways a long time ago. It had been kind of fun while it lasted but what looked to be a fairly interesting sub-genre swiftly became the same 'angst ridden sex' plot recycled over and over again. This may sound rich coming from me (the guy who has a bit of a soft spot for derivative epic fantasy) but there you go; I never once said I was fair minded ahout these things. Urban Fantasy and I were done... Until now that is.
You all know that I am a sucker for comic books (especially right now) so it was a bit of a no-brainer that I would give 'Cemetery Girl' a go.The blurb sounded interesting as well; go on, have a look.

Half remembered traumatic events lead to a young girl waking up in a graveyard with no idea of who she is, only that she must hide if she wants to survive. Others live in the cemetery but they are more interested in passing on to whatever life comes next, they are no danger to her.
What was a search for answers becomes a whole lot more though when our heroine witnesses an arcane graveside ritual gone badly wrong. Our heroine is on the run again with a passenger in her head who can't leave until justice is done.

'Cemetery Girl' is a very quick read, so this will be a shorter review than normal, but it was also a book that was incredibly easy to get into and read along. While I could probably take an educated guess at where the story is going, Harris and Golden's handling of the plot so far means that I will stick around for a while at least.

Harris and Golden make this first instalment a gripping one by dialling back the supernatural elements (making them more intriguing) and concentrating on the mystery of our heroine instead. Who is she? Where has she come from? Will she ever find it in herself to trust the lonely old caretaker? Okay, that last bit probably wasn't what the writers were aiming for but, for some reason, that one hit the spot for me.

There are loads of questions to be answered here and, on the whole, Harris and Golden do a good job of maintaining the readers interest. They do string things out a little too far though, there's only so much you can say about a character with no identity (when you're not planning on answering your own questions just yet) before it starts to get old. Luckily for us, Harris and Golden rescue things by allowing the ritual murder plot to have a little time. It's a good one too if resolved a little too simply.

On the whole then, 'Cemetery Girl' is a promising start to what looks like it could be a promising series. I wasn't too sure about the artwork (Kramer's work is good but missing a little something that I can't put my finger on, let me get back to you on that...) but there's enough here for me to give the series one more book at least. Maybe Urban Fantasy and I aren't quite done after all...
Posted by Graeme Flory at 10:54