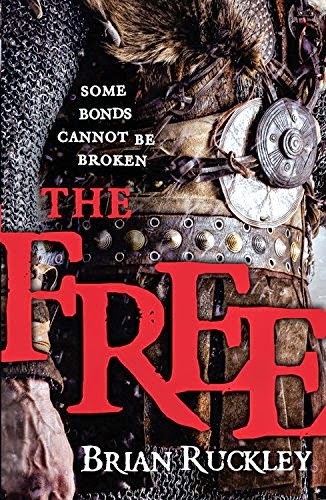 They are the most feared mercenary company the kingdom has ever known.
Led by Yulan, their charismatic captain, the Free have spent years selling their martial and magical skills to the highest bidder - winning countless victories that shook the foundations of the world. Now they finally plan to lay down their swords.
Yet when Yulan is offered a final contract, he cannot refuse - for the mission offers him the chance to erase the memories of the Free's darkest hour, which have haunted him for years.
As The Free embark on their last mission, a potent mix of loyalty and vengeance is building to a storm. Freedom, it seems, carries a deadly price.

I can't remember why I never carried on with Ruckley's 'Godless World' books after thoroughly enjoying 'Winterbirth'; somehow the time was never quite right I guess. The premise of 'The Edinburgh Dead' never quite appealed to me either and so it has been a few years since I've read anything by Brian Ruckley. The prospect of a new fantasy novel piqued my interest though, especially when I realised it was standalone and there were no worries about committing to a series (I have HUGE 'series commitment' issues right now…) And it was about mercenaries as well! I always enjoy reading military sci-fi/fantasy as the whole 'band of brothers' theme is one that's rich for exploring characters and seeing just what people will do to survive the battlefields of speculative fiction. On the face of it then, 'The Free' looked like it had everything I look for in a book and written by a guy with good form for writing fantasy. It couldn't really go wrong… Could it?


The good news is that nothing went wrong, nothing at all. The only criticism I'd level is that every now and then, Ruckley's prose doesn't quite match the high standards he has obviously set himself in terms of world building, exploration and characterisation. There were times when the prose didn't grab me in the way that it was clearly meant to and I was left reading in order to get to the next good bit rather than reading because I really wanted to. If you know what I mean.

What didn't grab me though may end up grabbing you by something vital, and refusing to let go, so don't let me put you off on that score because there is still one heck of a lot to recommend 'The Free'.

'The Free' is an engaging mix of action and introspection with panoramic scenes combat broken up with characters reflecting on it all. Fair play to Ruckley for avoiding what could have become an issue of 'ebb and flow' with the pacing of the novel. There is just as much weight given to Yulan's issues surrounding leadership of the Free, and Drann's unique perspective on it all as contract bearer, as there are to each of the battles. All of these have a suitably climactic feel to them by the way; you may only be a hundred pages into the book (with clearly a lot more plot to go) but you can't escape the feeling that a lot rides on each confrontation. It all makes for a gripping read.
Ruckley's treatment of the Free initially casts them in a familiar light to most other mercenary companies etc that you will come across in speculative fiction. A hard-bitten crew, very good at what they do and with loads of enemies because of it. Dig a little deeper though and their feeling of shared responsibility, over one of the darker moments in the history of the Free, is an intriguing hook that will have you rooting for them all. That and Ruckleys exploration of his magic system, the Entelech, and how it can result in 'permanences' that are as likely to kill allies as well as enemies (and wouldn't we all secretly want to own something like the Clamour? I would)

Seeing all of this through the eyes of Drann, a young man who can just about hold a spear and found himself in the right place at the wrong time, also makes for compelling reading at times as we see not only his preconceptions of the Free both shattered and confirmed but we also see his character tempered in the warfare that follows the Free. He is not the same character who starts the story and that's as it should be when coming out of a journey like the one he has made.


'The Free' is a lot of fun to read and gives its readers a lot to chew on, all wrapped up in a world that I for one would like to see more of. Given the ending, it is highly unlikely that we will see any more of the Free but I can but hope… Look out for 'The Free' around October 14th and when you see it, buy it.
Posted by Graeme Flory at 06:42

Email ThisBlogThis!Share to TwitterShare to FacebookShare to Pinterest
Labels: 2014, fantasy